Are you thinking about buying new elk hunting boots?

What are the features you should be looking for? 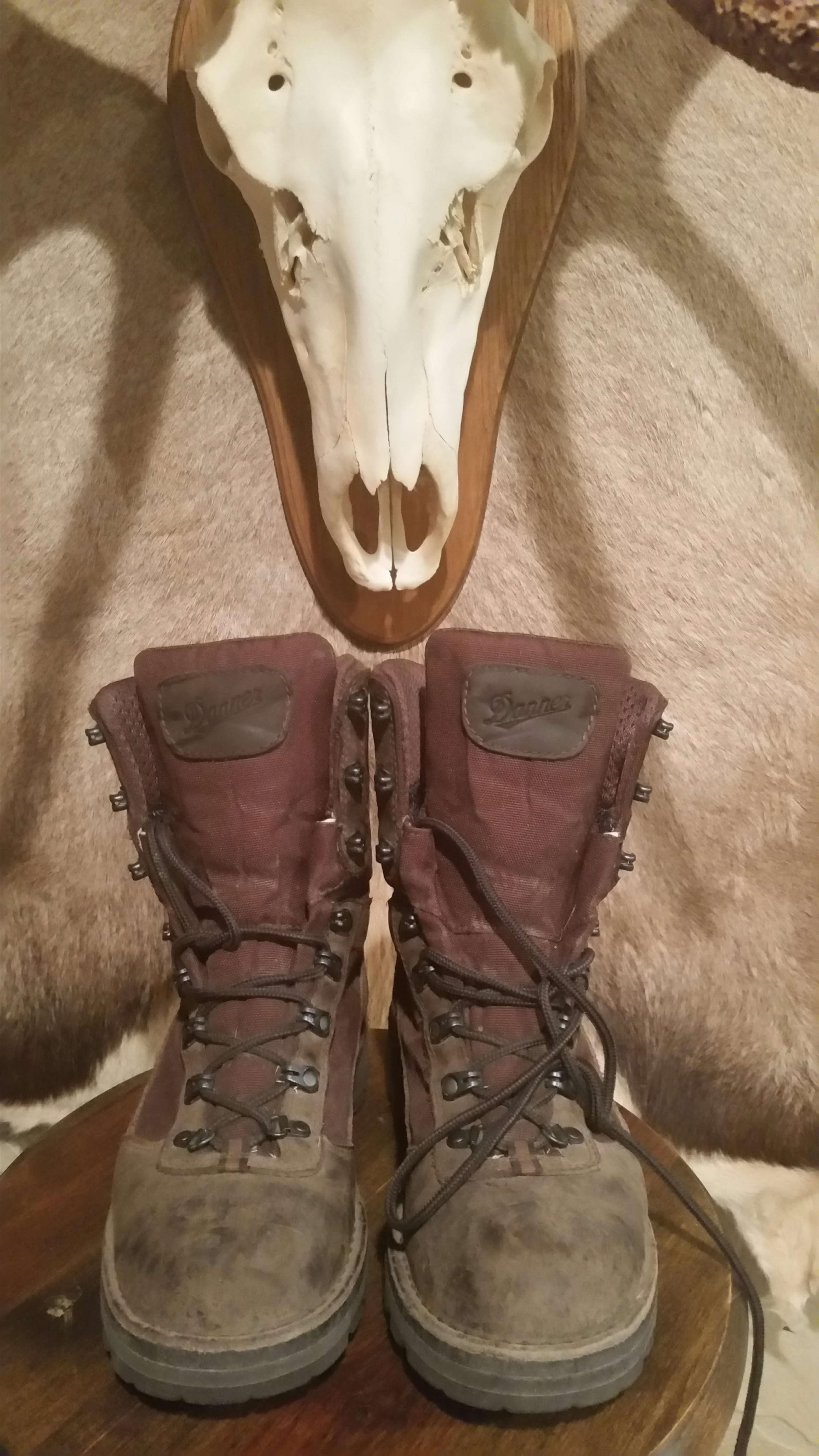 After many years and many miles of hiking through the elk woods, I have come up with 5 essential features that I think elk hunting boots need to have.  Below you can read the transcript or watch the video to the right.  Let me know what you think in the comments below!

Hi, I’m Jimmie Norris with elkhunterguide.com.  You know, I see lots of questions from first time elk hunters who are planning to buy a pair of boots for elk hunting.  Now, it’s a good question: “What boots should I buy?”  You know, elk hunting boots can either make your hunt an enjoyable one, or a miserable one.  So it’s a very important question to ask.

You know, 40 years ago, when I first started elk hunting, there weren’t many options when it came to elk hunting boots.  So I bought me a pair of Red Wing work boots.  Now, they were very rugged.  They had a Vibram sole.  They had very tough leather.  And they worked pretty well.  The biggest problem with them was that they weren’t waterproof.  Yes, I treated the leather with mink oil, and different things to try to make them waterproof.  But the reality was, after walking about 20 minutes in heavy dew covered grass, my boots were going “Squish, Squish, Squish, Squish.”  So that didn’t work very well.

The next year, I bought me a pair of LL Bean boots.  Now, these boots are great, as far as waterproof goes, because they are rubber bottomed, leather topped.  They are actually very comfortable.  They’re light weight, and I really liked them.  But, they had some downsides too.  The rubber bottoms obviously don’t breathe very well, so my feet got really hot and sweated a lot.  And the soles didn’t have much of a grip.  So that wasn’t very good when I was climbing down on the rocks.  And finally, this rubber sole, even though it was very quiet, wore out very quickly, as you can see.

I’ve tried different styles and brands of boots over the years.  And as new features came out I would try different ones.  But, now that it’s the 21st century, there is a lot that is available.  And I want to talk to you about 5 different essential features that you need to find in a pair of elk hunting boots.

The first important feature in an elk hunting boot is to make sure that it has a waterproof liner, like Gore-Tex or some other similar material.  Now, if you’re not familiar with Gore-Tex, it’s a wonderful material that allows water vapor to pass through from the inside of your boot out.  And it keeps liquid water from coming in from the outside.  So your boot is waterproof, and yet it breathes, unlike the rubber boots that I was talking about earlier.  So that’s a great feature to have.

Now, there are some other materials besides Gore-Tex out there that are supposed to work the same, such as Cabela’s Dry-plus.  I’m not familiar with it, so I can’t vouch for it one way or another, but that type of material is a very important feature in having waterproof boots.

Now, one thing to note about Gore-Tex is that it does keep your feet warmer than a boot without a liner.  Yes, it does allow it to breathe somewhat, but it is also an extra barrier inside the boot, so it will keep your feet a little bit warmer.

Another thing to note about waterproof boots – now some boots just claim to be waterproof, and they don’t have a Gore-Tex or any other type of liner.  So the thing about these boots is, what makes them waterproof is that the material is treated with some kind of a chemical to make it waterproof.  And it can make it where it doesn’t breathe very well, and in reality, the waterproof aspect of it typically doesn’t last through the whole life of the boot.  So, it won’t be long until they aren’t waterproof anymore, if they ever were to begin with.  I would avoid boots that just claim to be waterproof, and make sure you get a good quality boot with a Gore-Tex liner.

The second important feature of a good elk hunting boot is that it has a good, solid sole.  This sole needs to have really deep lugs, so you have good traction on it.  It needs to be good and solid to protect your feet from sharp rocks and cactus and that type of thing that you might step on in the woods.  A good brand of sole is a Vibram sole, that’s what this one is.  Many good quality boots have a good Vibram sole.  So leave your smooth boots at home, ones you might use for bird hunting or something like that.  Make sure you have elk hunting boots with good, deep, rugged soles on them.

The third important feature of a good elk hunting boot is the quality of the upper.  Now the upper is the part of the boot that is all above the sole.  So the first important thing to think about with an upper is the material.  Now, most boots today are made of leather, and leather is a great material, because it’s flexible, and it can breathe, and it’s rugged.  Some boots will have parts of the boot that is made with man-made material, and that’s not nearly as rugged as leather.  For instance, these boots had the toe cover here, that was not made of leather.  It’s a man-made material and it just didn’t last nearly as long as the leather.

One exception to that is the nylon mesh panels that are in a lot of boots that help with ventilation.  Typically those are in places that don’t get a lot of wear anyway, so they’re okay, and in good quality boots often.  Make sure the upper is made of good material.

Another thing to look for in a good quality boot is a fully gusseted tongue.  Now, that’s not some dread disease or some piercing fad, no that’s how the tongue is attached to the boot.  It’s attached up on the shaft of the boot, and why that’s important is that is because you don’t want debris and dirt going in around your feet, obviously, down the top of the boot.  A fully gusseted tongue will prevent that dirt and debris from going inside your boot.

Another thing it will do is help with the waterproofness.  Because when the Gore-Tex material, like this right here, comes up on the gusset, then it helps prevent water from going in.

Finally, one other thing to look for on the upper is look for the stitching around the edge to see if the upper is sewn to the sole.  It’s a good sign of a good quality boot when you have a sewn upper.  Having said that, I know that there are some good quality boots out there that have bonded uppers, so they are actually glued to the soles, and they work very well.  Although, I have seen some where the sole has actually come apart, so I prefer to have boots with a sewn upper on them.

Those are some of the features in a good quality upper that you need to look for in a good elk hunting boot.

The fourth important feature in an elk hunting boot is to have a good quality midsole.  The midsole is this area right in here in between the sole and the upper.  A good quality midsole is going to be cushioned.  That cushioning actually absorbs the shock of every step that you take, and it will really reduce the fatigue that you experience while you’re hiking.  It’s very important.  Very much like running shoes, these boots will have a cushioned midsole.  Most boots have it these days, you just need to make sure that the elk hunting boots that you’re shopping for have a good cushioned midsole.

The fifth important feature of a good elk hunting boot is that it has a removable insole.  The insole seems like a minor thing, but if you can pull it out, you can clean out the insole, you can clean out the inside of the boot much more easily.  And if you need to replace it because it’s worn, or if you want to replace it with another one that has more arch support, then it’s really easy to replace if it’s removable.  If not, then you are just going to have to put something in on top of it.  But a good boot, will typically have a removable insole, so you can customize it to your foot.

What Do You Think?

Well, I hope you have found this video helpful.  Did I cover all of the features that you think are important?  Do you agree with me?  Disagree with me?  Either way, scroll on down to the bottom and leave me a comment.  I really would like to hear from you.  And if you haven’t downloaded your free list of tips from website, elkhuntersguide.com, surf on over there and download that free list of 35 elk hunting tips.  You’ll be glad you did.

Until our next video, shoot straight.