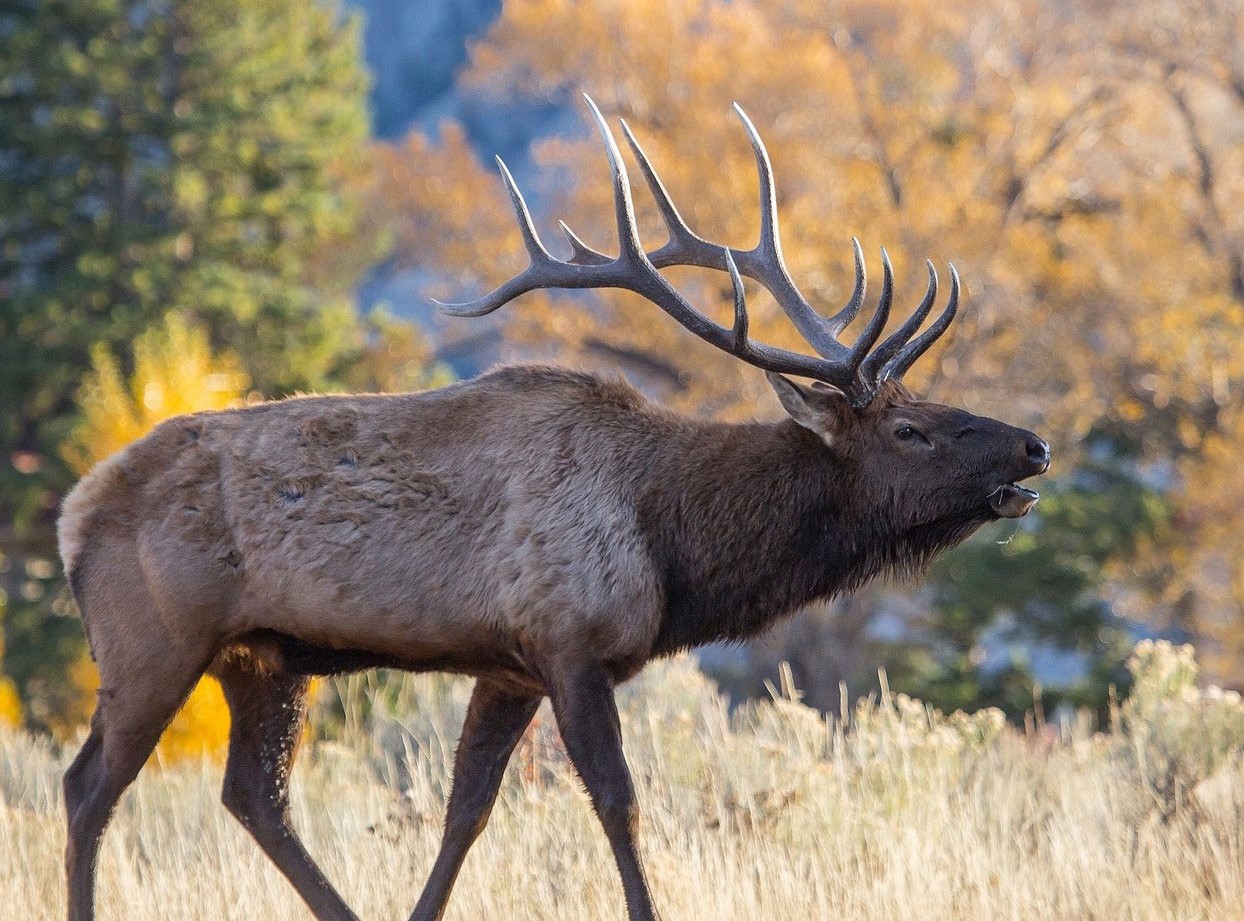 What is your favorite of all elk calls?  Do you have one?

In today’s blog, I’ll explore some of the different elk calls and why I have developed a favorite.

I looked at the clock on the tent floor next to my sleeping bag.  12:08 A.M.  The sound that woke me up was unmistakable.  A bull was bugling in the meadow next to camp.  Some bulls end their bugle with a chuckle.  This guy ended his bugle with outright laughter.  At least that’s what it sounded like.

We had camped on the edge of a huge meadow just off the main forest road.  I normally don’t like to camp in the middle of prime elk habitat.  But, in reality, the elk determine where their habitat is, not us.  The location of my camp didn’t seem to be bothering this bull and his cows.  He bugled and the cows and calves chirped and chattered all night long.  I knew there was nothing I could do but wait.  I think the bull knew too, and must have thought that it was funny.  Just as I would drop off to sleep again, he would bugle with hilarity.

After several hours of fitful sleep, it sounded like the elk herd had moved to the far side of the big meadow.  At about 4:00 A.M I couldn’t take it anymore.  I had not heard the bugle in some time, so I assumed that the elk had moved on.  I crawled out of my bed and slipped on my camo clothes.  My wife wished me luck as I quietly unzipped the tent door and stepped out into the moonless night.  I eased over to my truck to get my bow.  The door latch sounded with a loud man made “clack”, even though I was trying to be as quiet as possible.  The dome light shined like a signal beacon even though it normally seemed dim.  I hoped that the elk were far enough away that these foreign sights and sounds didn’t alert them to my presence.  But not too far.

It was still much too dark to see the far side of the meadow.  I could make out the vague outline of trees near my camp.  Since the wind was favorable, I slowly eased toward the nearest tree, turning myself into a hunter phantom.  I strained my eyes to see in the distance, but the black ink over my vision was limiting.  My movements were sloth-like as I slowly floated from tree to tree on the edge of the large opening.  As my truck and my tent gradually faded from view, my ears were perked, concentrated on listening.

The sound of the elk had been absent since I had gotten out of bed.  I was hoping that they were still where I last heard them.  I was hoping that my movement in the dark had not alerted these nocturnal creatures.  Suddenly I heard the sound of running hooves.  Not a whole herd, just one animal.  Not running away, but running toward me.  The hooves stopped, as I tried my best to become part of the landscape.  After a few nerve wracking seconds, my heart nearly jumped through my nostrils as the elk “barked” at me.  Then the sound of hooves again, running in another direction without my ever seeing them or their owner.  At least the elk didn’t go in the direction that I thought the elk herd had gone.

Finally the eastern horizon began to turn gray.  I could make out the dark silhouette of the trees on the far side of the opening.  But I could not see the lighter color of elk or detect any movement.  I continued my trek from cover to cover, able to move more quickly with the growing light.  When I eventually arrived at the tree line on the edge of the park, I began to look for tracks.  Unfortunately, the ground was a combination of grass and gravel, masking any evidence of recent activity.

After about an hour of searching for elk or sign, and listening for movement or elk chatter, I came to a conclusion.  I had blown it again.  Either I had spooked the elk long ago, or they had left the area by a different route than I expected.  I decided to make one last attempt to locate the humorous bull and his friends.  I reached into my pocket and pulled out my diaphragm elk call.  This was my second year bowhunting and my first year trying to use any elk calls.  There weren’t many options available back then and the diaphragm seemed difficult to master.  I was far, far from being a master.  I knew that roughly 1 out of ten of my attempts sounded vaguely like an elk.  The other 90% were the screams of a tortured rodent.  But at this point I had nothing to lose.  I couldn’t find the elk, and my only chance to locate them was to try one of my elk calls.  The previous statistics held true and I found the sound of several pain stricken rats before coming across something that sounded somewhat elkish.

My elk call elicited no response from any creature, small or large.  I sheepishly returned the call to my pocket and started back toward camp.  When I reached the edge of the meadow, I could see my wife stirring about our tent several hundred yards away.

As I started the hike toward her, she spotted me and met me in the middle.  “Was that you that made that sound?” my wife asked when we were close enough to chat.  “I was trying to sound like an elk” was my embarrassed reply.  Then she explained that when she heard my very feeble attempts at an elk call, she looked in the direction of the sound.  It was then that she saw “something brown” running across the far end of the opening.  “Could it have been elk?” I asked.  “Maybe.”  “Which way did they go?”  My wife pointed to the side of the meadow where I thought the bugles had originated the night before.  As if right on cue, the bull bugled from that very spot.  I knew it was him because of the same humiliating laughter at the end of his call.  It certainly felt like it was directed at me.

Don’t let my resounding failure at my first attempt using elk calls discourage you.  With some practice, anyone can learn elk talk.  It is one of the most exciting things about elk hunting during the rut.  It can also be effective outside the rut.  Learning to imitate some of the basic elk sounds can be an important part of a successful elk hunt.

To imitate the sound of an elk, you need to know what an elk sounds like.  Visit this link to hear some of the many sounds of these vocal animals.  Here are the main types of elk sounds you need to learn:

Since cows make up the largest part of the herd, this is the most important call you need to master.  A basic cow call can entice a bull to bugle in the rut.  It can help settle nervous elk and keep them nearby.  It can attract both bulls and cows to check you out.  Bulls bugle primarily around the time of the rut, but cow calls can be effective during any season.

This is the most distinct of all the elk sounds, and is often the call that many new hunters try to learn.  Bulls bugle to keep track of each other, starting before the rut begins and tapering off with the last days of the rut.  A hunter’s bugle can sometimes get a response that will help locate a bull.  It can also bring a bull closer in an attempt to size up the competition.  But some bulls would rather flee than fight, and a new bugle in the area may cause them to gather their cows and leave.  For this reason I use a bugle to call elk sparingly, and some days not at all.

This is the sound a cow will make when she is ready to breed, and will drive a bull crazy during the peak of the rut.  The biggest bull I have ever killed was called in using this sound.  He left a cow that was not interested, and charged in within bow range even though he was downwind.  But it’s not always an ace-in-the-hole.  The timing of the rut has a lot to do with it.

There are many types of elk calls on the market, and they have come a long way in the last few years.  They tend to be easier to use and can be very realistic sounding.  I carry several different calls with me to sound like different elk in different situations.  But of all the types of elk calls on the market, I suggest every elk hunter should master a diaphragm.  I personally like the Carlton brand, because of the way it fits my mouth, but there are other styles that may suit you better.  The reason I like this type of call is its versatility.  With a grunt tube I can bugle and chuckle.  I can sound like cows and calves and a cow in heat.  The specialty calls for these different types of sounds are probably easier and may sound better.  But I like having one call that I can use in almost any situation while keeping my hands free.

And yes, I have improved my elk calling abilities since I first started.  I have successfully used this call in many different situations.  It has given me plenty of close encounters of the elk kind.  Now, if I could only capitalize on those encounters more often.  But that’s the subject of another blog.