Is Rattling for Bull Elk Possible?

Can you use this whitetail technique on bull elk? 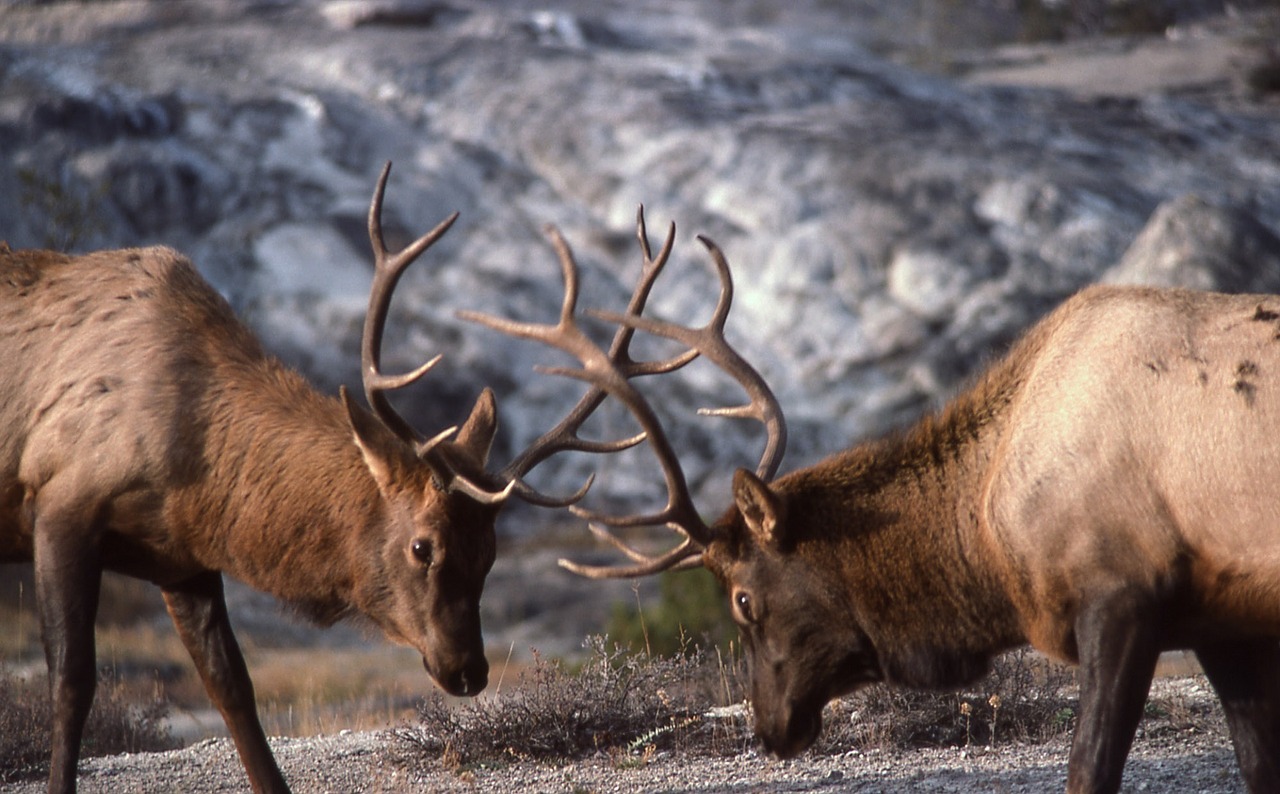 The bull’s bugle raised the hair on the back of my neck.  My heart pounded even faster knowing that this bugle was closer than the last.  Our plan was working.

It was a warm September afternoon in Northern New Mexico.  My bowhunting buddy, Ray and I were crossing a large drainage when we heard the first bugle on the far ridge.  Ray bugled back, and started a conversation with the bull.  We both cow called, trying our best to sound like a small herd of elk, as we moved in the bull’s direction. Ray continued bugling, and the responses were clearly closer each time.

The talkative elk was on private land, and we didn’t have permission to hunt there.  We were going to have to draw him to us to have any chance at a shot.  The ponderosa pines were thick on the ridge tops, giving way to pinyon and junipers at the base of the slopes.  The very bottom of drainage opened into a sage flat, with no trees for cover across an 80 yard swath.

Ray, being the ever generous hunting buddy, suggested that I move to the bull’s side of the flat.  He would stay on his side and try to call the elk to us.  We knew it was unlikely that the bull would cross the open flat without seeing any elk on the other side.  Our plan was for me to intercept him as he moved toward Ray’s calls.  If for some reason the bull decided to cross the opening, Ray might be able to get a shot.

The bugles continued to sound as if they were getting closer, until they didn’t.  The bull was stalled, somewhere out of sight.  This is not unusual, and if it happens you need to change tactics.  There are several things you can try, depending on the situation.  You can try to move in on the bull silently if you have enough cover to stay hidden and a good wind to keep from him smelling you.  You can try different types of calls, such as a cow in heat, to sound more enticing.  Or you can do what Ray did, try rattling the bull elk into shooting range.

I admit that I’m using the term “rattle” rather loosely here.  What Ray actually did was pick up a large dead branch and start raking a tree.  He continued to alternate between bugling and beating.  This got the bull moving again.

He continued to “talk” to Ray as he moved closer.  The wind was going to be favorable as long as the bull continued along his current trajectory toward Ray.  I was standing behind a large juniper, peering through the thick branches.  That’s when I saw the 5 point moving cautiously toward the sound of Ray’s ruckus.

I was set up on the edge of the sage flat, and just as we had hoped, he stopped 40 yards away from me, perfectly broadside.  The bull was focusing his attention in Ray’s direction, trying to get a glimpse of this intruder.  I eased around the juniper and drew my bow.  BIG MISTAKE!  The bull saw my movement, and almost turned inside out as he changed his direction 180 degrees.  In less than a minute he was in the shelter of the thick pines on private land.

Education experts say that you don’t truly learn something until you actually apply the head knowledge that you have gained.  Or, as in my case, you fail to apply the knowledge and suffer the consequences.  I knew that I should draw the bow BEFORE I moved from behind the tree.  But in my inexperience and with heart pounding and adrenaline pumping, I didn’t think it through.  It was a hard lesson to learn, and one I’ll never forget.

It wasn’t the first shot opportunity that I had blown, nor would it be the last.  But I wouldn’t have even had the chance to screw up if Ray hadn’t done such a good job of calling the bull into range.  Sometimes it feels kind of crazy to switch gears from being quiet and stealthy, to making all kinds of noise by beating on a tree.  Even so, it can be a really effective tool for attracting elk in the right situation.

Like deer, elk will rub their antlers on trees.  When they are shedding the velvet from their antlers in late summer, rubbing helps remove that layer of soft tissue.  But pummeling the pines is primarily a display of strength.

As the rut begins to commence, bulls who had been hanging out with each other all winter, spring, and summer, begin to see each other as rivals.  Young bulls will spar with each other in a faux fight.  The clatter of clashing antlers can be heard for long distances. If it sounds serious, other elk will come to see the fight.

But before it gets to that point, bulls will often put on a display of bugles and tree thrashing.  Like antlers banging together, the sound carries for a long way.  If there is a new bull in the neighborhood strutting his stuff, other bulls may come around to size up the new guy.  So if you can sound like a bull tearing up a tree, you may pique a bull’s curiosity and bring him into range.

This technique works best in pre-rut and during the rut when bulls are establishing and maintaining a pecking order.  Once a herd bull has gathered a harem of cows, he may be less likely to come to the sound of raking a tree, unless it is close enough for him to feel really threatened.  However, satellite bulls may quickly respond, though they usually approach silently.

I don’t think there is any real finesse in raking a tree.  I have watched many bulls do it over the years.  They may work at it for 15 seconds, or several minutes.  They may stop and bugle, then start again.  There are only a couple of important factors in trying to sound like a bull.  First is to thrash with a big enough stick to make a loud “crack” sound.  Second is to do it in a spot where the timber is thick enough to keep your movement hidden from an approaching elk.

I’m confident that bulls will come to true “rattling” – antler against antler.  But given the size of elk antlers, it’s certainly not practical to carry sheds around for calling.  Even if you did, it would be difficult for one person to knock them together hard enough to sound like two bulls fighting.

If you are blessed enough to have the opportunity of hunting elk during the rut, consider rattling bull elk to get them into range for a shot.  If nothing else, it will give you a great upper body workout.

One other thing, if you do get a shot opportunity, don’t mess it up like I did.

Have you ever tried raking or rattling for bull elk?  Take a few minutes right now and share your favorite experience in the comments section below.